My First WGT Part One

A few weeks ago, I finally fulfilled my life long dream of making the pilgrimage to the Mecca of the Gothdom, Wave Gothic Treffen. I always had a grand envision I would be absorbed and swoon in my best velvet in awe and wonder, never wanting to leave. Yet,  I found myself with a more reserved attitude, I definitely enjoyed myself, I just didn't get swept up in thethe allure of everything; I felt a combination of breathtaking and meh moments.First of all, we didn't arrive in Leipzig until Friday afternoon, as we saw Fleetwood Mac in Berlin at Waldbühne amphitheatre we got caught in the torrential rain and soaked through. It made me feel disappointed, as we cut the concert short. 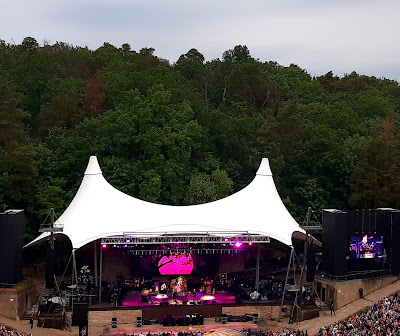 The Boyfriend and I agreed on a few rules; to avoid the UK bands, bands that we could easily see in the UK, or we've seen previously. We wanted to discover new bands or see ones that we couldn't easily see live. That rule got broken on the first day; We tried to stick to it, unsuccessfully. Also, to try and stay in one venue or see bands close in enough. Even though WGT is a huge festival, it feels more like a series of mini-festivals with the number of venues hosting bands. This year the festival hosted over 200 groups,  and I found they were competent, but only a few bands really stood. The plethora of musicians covered catered for all music tastes. The thing I hated was how there might be one or two bands I wanted to see simultaneously, but the venues were the complete opposite direction. The collection booth, to collect our wrist bands and information, opposite the train station. We waited for ten minutes; I had read posts on the Sadgoth.com Facebook page, stating some people queued for five hours in the heavy rain. The ticket fee included venue entry for the bands, free transport, free entry to events, gigs and even free admission to the local attractions and museums. For £130 per ticket, it was a bloody good bargain.

The boyfriend was organised with syncing everything to  Google maps and spreadsheets. We only discovered the app a couple of days earlier. The app was invaluable to use as it allowed for us to listen to bands via  Spotify. For some reason the player wouldn't play on my phone, I mainly listened to the bands on Bandcamp or Youtube.  The app also helped to navigate around the city to different venues,  and details which trams to use. However, Google maps are crap at providing free travel information, it was best to use  www.lvb.de. Websites time table. My favourite thing was how the boyfriend and I could sync our plans together.

The boyfriend wanted to see Cubanate I wasn't bothered to see them after listening to their song. I decided to divide my time between Darker Her, I also wanted to see Coph Nia. I thought I would go and catch then see October Burns Black, leave to see  Coph Nia. It never happened as the Boyfriend wanted to stay at one venue. I could see Darker Her sometime in the future since they're from West Yorkshire.
I headed to Tauberchenthal, be honest, this seemed like the better option. I saw Joel a friendly face and said hello, and he introduced me to some of his friends from the Leeds scene. The Other half and I often travel to Leeds, regularly.
I was chatting to Joel and his friends. The light dimmed and brightened with the band complete their final sound checks and finely tuning their instruments before starting.
The first band was October Burns Black; The light brightened, quickly dimmed with the group emerging from the smoke, opening with With You. A  great introduction, I had never heard of them,  it was more steady uptempo danceable track, with the dual of guitars creating a droning riff, the band utilised a mixture of synth, real drums and Ger's vocals had an of a lighter bass style. Next, the group took a darker direction with Light On Light, that had a more of a post punk quality with more brittle lounge guitars and tribal drumming. The band moved between more uptempo songs and the slower melodic songs. As the group continued to play the crowds increased with more people coming into the ground floor and balcony area. All the audience were clapping and were roaring with cheers.
Unfortunately, with the heat wave, and the number of people crowding inside the heat got too much. I finished the rest of the set outside with fresh air. 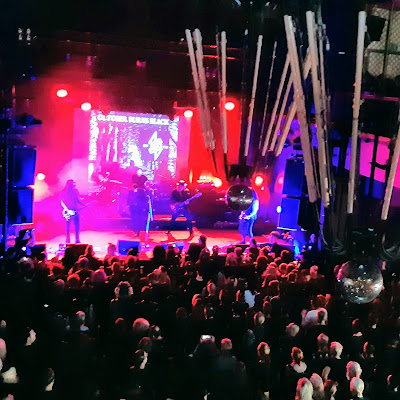 I went out for fresh air, and it felt like everyone had created their own tribes of goths, so we opted to call ourselves the Northern Goths, who joke about goths and being goth. One person commenting we take goth about 10% seriously. I learnt about the Guffites from the '80s, or I like calling the Uber Goths.  We were all complaining about the heat and melting. The was more gibe r- jabbering like the Northern folks do. 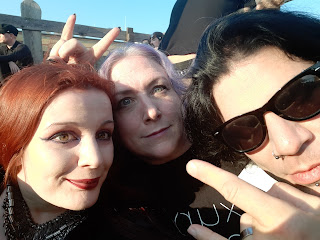 I got to meet Black Friday, which was pretty cool. I have to say she is a very open, friendly and generally lovely person. She introduced me to some of her friends. I felt kinda rude butting in all we're just charming people. I was surprised at Black Friday' height she is tall, I'm a short arse.

I also said "Hello" to Rosie Garland and got her to pose with Joel. It brought back good memories of the Leeds City Festival history discussion of Leeds. Definitely two important Gothic Northern Icons, according to me. I think they were contemplating the importance of the North of England in regards to goth culture.

I  headed in at the behest of the other half to check out the next band.
The Golden Apes are a German-based postpunk goth style band who definitely have their distinctive style. I loved their thunderous tribal drums creating heavy percussion, it was further enhanced by the rock style strings section with the heavy rifts from the guitar and bass. I loved Germanised guttural baritone vocals style. The band was a highly talented band, and The group are long established with over twenty years of playing. I love this band from the moment they started playing they were absolutely fantastic and got the crowds roaring, the venue got even more crowded, I'm not sure how.

We headed back into town for food, I found the Black & Blacker Imperri Dark as night burger it was delectable.

We went to discover Moritzbastei to check out La Scaltra and Scarlet Dawn. Sadly, the venue was incredibly packed, very sweety, and uncomfortable. I kind of caught some of Scarlet Dawn they sounded European melodic rock with gothic undertones. The crowd were roaring with adoration for the band. I was disappointed, I didn't see La Scaltra perform their haunting sound and energy seemed perfect for Mortizbastei cellars.
For some reason, we decided to go back Tauberchenth, and we caught the end of UK Decay, which had energetic Punk Vibe, just not my kinda band they definitely had crowds in an uproar. We stayed some of the after party and headed back to the accommodation.