Gary Numan and The Skaparis Orchestra

A couple of weeks ago I saw Gary Numan. I have never been a huge Numan fan, after hearing My Name Is Ruin on the 35th anniversary of The Old Grey Whistle Test, I felt urged to purchase Savage. After first hearing the album, I was addicted and dominated my music choice for the last six months.

Numan's lyrics and sound create futuristic dystopian narratives of his perspective of seeing the world transformed into a barren desert through global warming. It has such a relevant commentary of what's happening to society and appeals my pessimistic nature.  I can see Numan being a prophet for what will happen if we continue on our current path.

We saw Numan performing the Savage tour accompanied by The Skaparis Orchestra at the Newcastle City Hall.  We had perfect seats sitting not too far back were able to to see the entire performance comfortably.

The lights dimmed with Chirs Payne supporting along with his wife Dominque providing vocals and back up keyboards for ambient, electro, synths pieces. It resonates with the audience into a deep, intriguing trance, especially with Dominque light operatic style vocals. The style of music seems to have a world influence reminding me of Dead Can Dance. Payne performed the solemn In Red Feilds, a lamenting song, written to honour those who died in service of the first world war. The audience became reserved and silent in their demeanours to show their respect. Chris finished with lighter atmosphere with  Fade Grey with Dominque providing backing vocals. The audience danced in a row, and they cheered with rowing applause. Payne and Domqiue took a bow making a prayer gesture and thank everyone for attending. 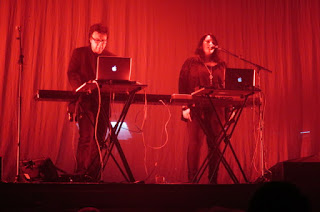 There was a thirty-minute interlude before Numan. The audience waited in zealous anticipation with every second, feeling like an eternity. Eventually, the performers slowly emerged taken their place.  It felt like a slow tease. The crowds began shouting a somewhere between a Geordie war cry and mating call "Numan, Numan, Numan.....". Seeing his name projected name sent the masses into fury. 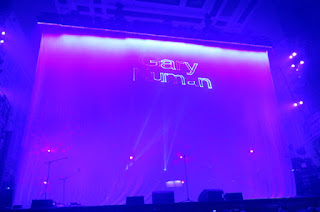 The screen dropped with Numan appearing. The audience clapped, in a standing ovation, with crowds in a ruckus and Numan revelling the crowd's admiration, with Gary smiling looking surprised and overwhelmed by the Geordie reception.

Simultaneously, the orchestra began playing the instrumental to Ghost Nation, with blinding lights accompanied the dramatic tribal drums and the string sections deepening distorted synths.  The band join in with the instrumentation, the lights dimmed with a smokey atmosphere, with blue tinted light and green lasers gyrating. Numan's warped, strained vocals singing the first verse, suiting the dystopian sound.  Numan captivating the stage presence silences the rowdiest of crowds. Numan adopted and modern interpretive dance with influences of tia chi movements to captive and refocused the audience's attention at his command. 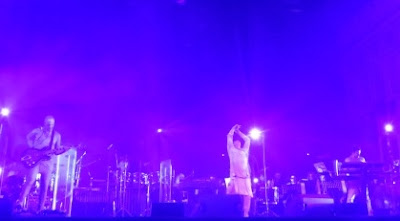 Ghost Nations ends with another uproar and standing ovation from the audience. Next, Robertshaw demonstrates his mastery as a conductor precisely weaving the orchestra instrumentations transition smoothly into upbeat Metal's intro. The orchestra leads by setting and maintaining the ambient atmosphere by initiating the introduction for the band who take the lead setting the stage for Numan to start singing. 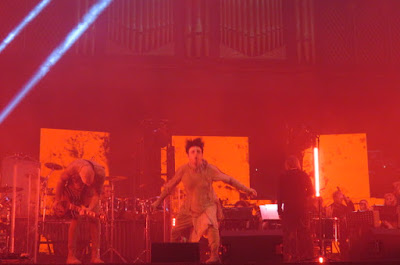 In the second performance, the crowds fully emerge to the full force with fiery red lights and emitting blue rays lights revolve into the audience turning into artistic lighting performance. The visual background screens play abstract colours adding a dramatic flair and following the Orchestra tempo; creates an intensive cinematic experience for each song.  I wasn't expecting. 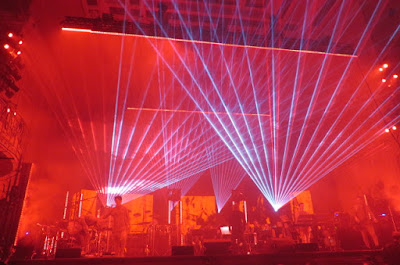 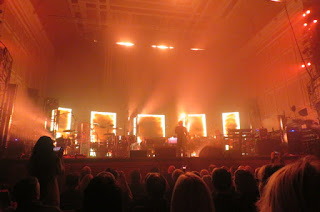 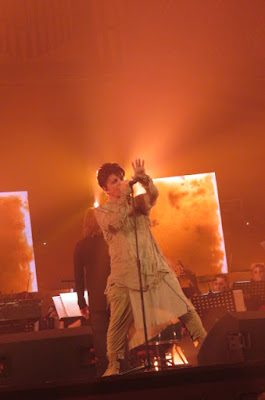 Next, is Bed Of Thrones accompanied with darker lighting to set the mood and compliments the song's music video airing.  Followed by Films. 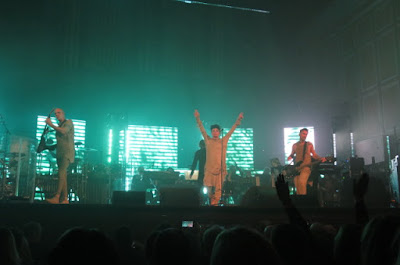 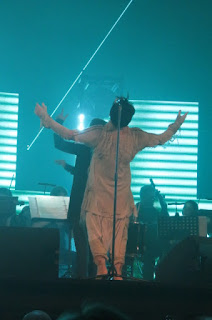 Numan tries to take fans emotive journey from high and low tempo songs.  With Robertshaw intern contouring Numan's music into a grandeur synthesis heightening the aural experience.  Through the use of string section used a deep, brittle sound to create middle eastern sounds. The percussion section brings raw tribal sounds to much of the set. 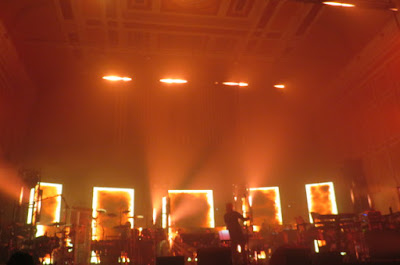 Numan attempted to cater for all his fans from his extensive repertoire.  Everything comes to You, morphed by Robertshaw to harsher steampunk industrial sound, clearer driven synths, and more of an even tempo. My second favourite from Savage Pray for the Pain You Serve. Robertshaw adds more prominence with the string section to the chorus lead by Steven Harris's guitar strumming, and the synth chorus has a higher pitch screeches resembling a war.   The cinematic experience continues with clips of Numan's barren future. Going To The Park, transformed with a darker industrial introduction with more distinction placed on guitars solo. 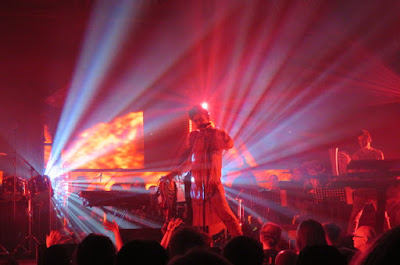 The new symbiotic sounds with the band and Numan, he's added a much darker operatic depth to Numan lyrics and music I'm mystified. 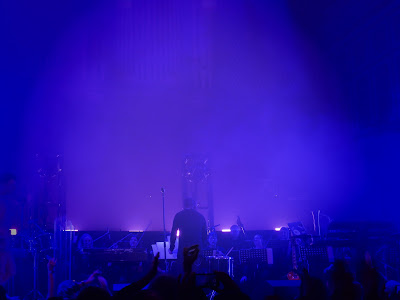 During the performance, even the group seemed to mesmerised by Numan with each member animatedly frolicking between, Harris, Tim Muddiman and Robertshaw. Every musician just emulates, how much they were enjoying performing through their body language and energy. Occasionally, Robertshaw headbanging along with the band during the set. Numan was incessantly smiling destroying his brooding demeanour. 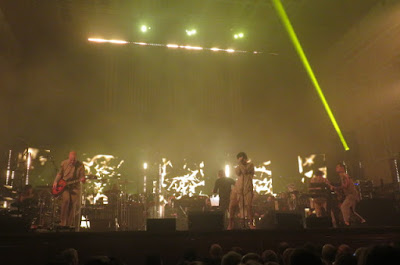 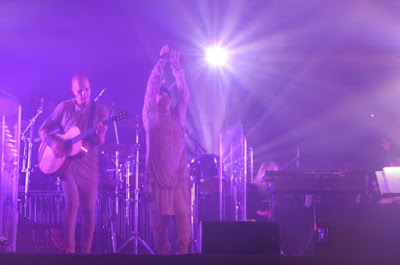 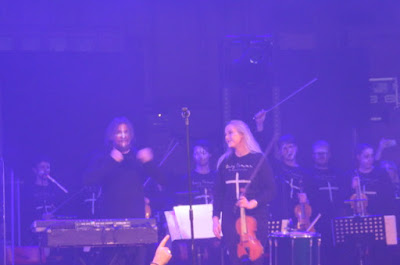 The screens and lights blaring with the industrial drum beat of My Name Is Ruin, sadly no Persia. Yet, an epic performance being subtly driven by Robertshaw, and Numan gyrating on the stage.  The song I had waited long for and many of the audience's reactions indicated the same, especially since many were dancing in the rows.  The next songs played until it came to the final and iconic song. My Friends Were Elected the audience in a rampage of dancing in excitement. 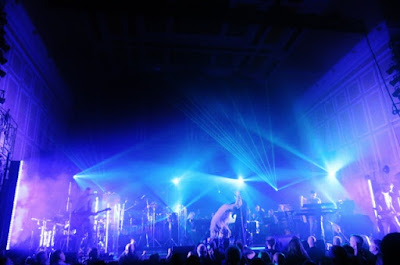 Afterwards, Gary addressed the fans describing his appreciation for everyone attending Introduced the  Skaparis Orchestra and conductor Simon Robertshaw. Numan delighted in sharing the "privilege" of working with everyone. Afterwards, everybody took a bow and left the stage. The crowd became restless again shouting encore, encore, encore. Everybody emerged with Numan body language stating "Gottcha". They finished with an encore of The Wreckage,  The End of Things, and A Prayer For The Unborn. To conclude the night, Numan played his latest ep It Will End Here; he wrote while touring. It had more uplifting and hopeful sounds compared to the pessimistic sounds of Savage. 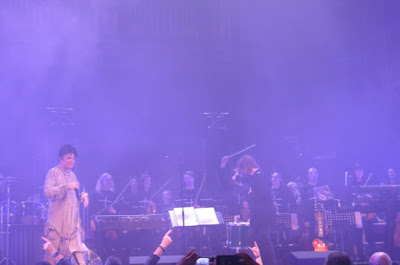 Overall the Gary Numan and Skaparis tour is one of the best concerts I've attended, the only one that can top this Rammstein. I loved how Numan has carefully choreographed not sparing any detail to chance, to create more than a concert but spectacular cinematic art show. With Robertshaw's genius transforming Numan's songs into modern style opera. Even after 40 years of music Numan is still as vibrantly progressive and explorative as ever why he has amassed a devout following, 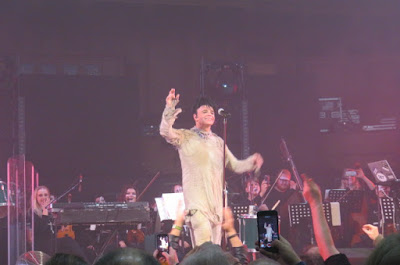 * My partner purchased tickets. I just enjoy the experience, writing process and mental stimulus of writing reviews.
at December 04, 2018

Email ThisBlogThis!Share to TwitterShare to FacebookShare to Pinterest
Labels: Nights Out, Reviews