As part of the New Years I've home improvements, I opted to get my living room floors sanded. They have always irked me,  and I regret not getting them sanding before all furniture went in.


A friend of mine recommended a company called AKL flooring who did hers. After seeing the results it was worth it. The only problem was getting the floors done when the boyfriend was away. I was planning not to go to Brighton this year at the end of May. Brighton's allure was too much to resist. I doubt we can afford a proper holiday this year.  Fortuitously, the Boyfriend had a night away with his union comrades in arms in Mid February, which coincide with my days off.  I got the men booked in.

On Thursday night we managed to get all the furniture out the living room, ( something I hope to never do again.

The team arrived promptly at nine and started immediately even after an hour of work I was shocked at the difference of the floor. It far brighter and airier. Surprisingly, the team were finished within four hours this includes prep, sanding and four coats of varnishes  They were packed away by 1:30. There was some dust but not as much as I had anticipated. They left everything immaculate condition. I paid for the floor, which I couldn't believe the price. £270.   I've also planned to get the guys back into the hallway which they quoted £250 .They explained to the difficult nature the floors board will need to be done with a hand sander.

I forgot to take a before photo I found these from a couple of years ago.  These were the best examples, I could find, lol. Overall, the floor looks crap. 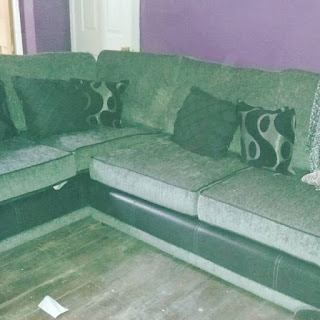 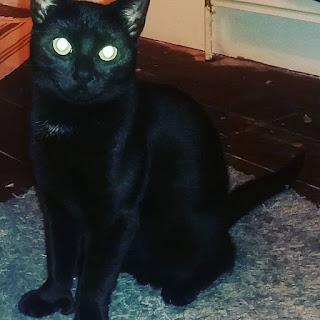 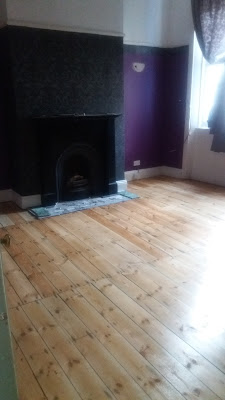 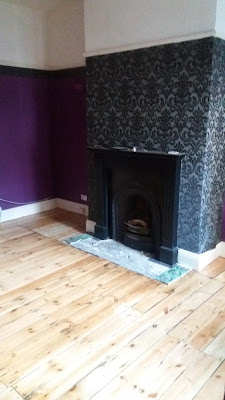 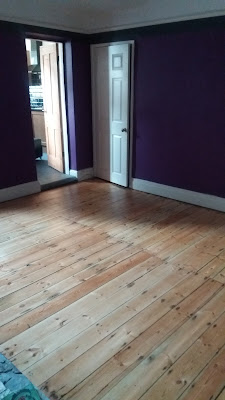 I repainted all the walls as the paint looked patchy in some area its made a huge a difference. Also, I've been enjoying having less clutter around its allowed me to clear and out some of the clutter. This includes my college of pictures where I've put my favourites on the wall. 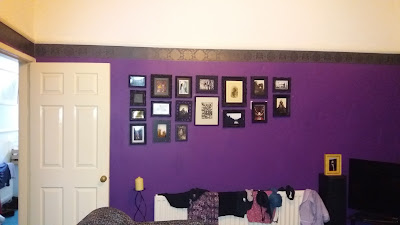 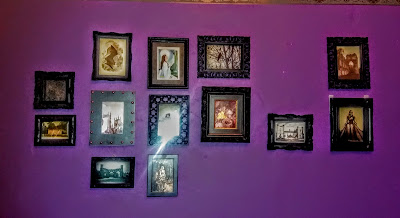 I don't really know what the draw to Leeds is personally apart from it being the Goth Mecca of the North. My personal opinion some would disagree and state Whitby which trues in one sense. In terms of the music lineage of the post-punk and goth movement, I would contest for Leeds. Generally, I just thrive down there its partly nostalgia of formative years, the romanticized musical history, and oh yeah, Leeds market and fabric shops the galore for dressmaking. Sometimes, I think even a change of environment is good for ones well being.

Anyway, the boyfriend and I decided to head down to Leeds for Carpe Noctum the local goth night, since it was my weekend off. We both doubted if I could attend Noir castle, Newcastle's local goth night, as it was my weekend to work, it may have changed as I've been put on a night shift, which I prefer anyway. I digress too much the night was a calibration of Carpe Noctum three talented goths bands from the North. Headlining were Rhombus,  and supporting were  Gothzilla and The Black Riders Cult supporting. Each performance captivated the audience while demonstrating their unique and distinctive repertoires.

Doors opened at 7 pm but the band performed from 7:30. we arrived early so I get some drinks and find a place to stand.

Just as the boyfriend arrived with alcoholic beverages the band emerge. The three-piece band arrived with a slight smokey atmosphere that added to the mysteriousness of the lead singer. Who had defiantly raided Eldritch's wardrobe. The band hail from Sheffield and bought a much heavier rift and base sound compared to other bands trad' goth bands I've heard. However, the band stook with tradition of using a drum machine,producing an reverberating synth sounds and the vocalist with his deep droning vocals, which sound some between Ian Astbury powerful note hitting voice and Andrew Elditch baritone vocals. I'm a big fan of heavy base and guitars rifts that to enhanced the band's unique and dark sound. I'm planning to purchase their EP and I hope they plan to bring a album out. 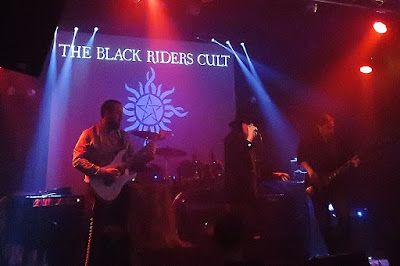 My favourite song by the band was Assassination, however the music video quality doesn't do the band justice.

Next up was Gothzilla, who is from Scotland, Glasgow. Gothzilla had loud cheer as the entered by this time the murkiness from the smoke machine dispersed it meant better photo quality. After their first performance, they invited the audience forward everybody was huddle about half way from the stage. The audience steps forward, Gothzilla with energetic performance had the front row members gyrating through the entire performance. I  The band have an extensive influence ranging from gothic rock, prog, metal and right through to electronic and industrial; that is heavily heard throughout the set. This was the second time I saw them perform. I first saw them while they were supporting Cold In Berlin in Trillians (in Newcastle). I remember seeing them after an awful shift at work their performance uplifted my mood dramatically, I converted into a fan.


An amazing and enigmatic band with a great traditional goth sound and unique interruption. Gothzilla has used powerful vocals, with complex riffs, guitar solo but has a clean guitar rhythm that is carried through the set, yet each song differentiates with the band utilizing electronic synths enhancing the band rich diversity in their songs 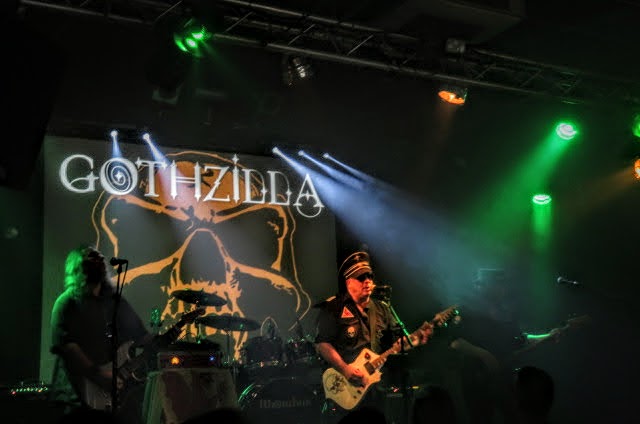 My favourite track had to the Edge Of Forever.


The headliners were Rhombus, I was ecstatic to see the band again. I was hoping they would tour up to Newcastle but it never happened. So, this was my second time seeing the band who just seem to be even better than the last time I saw them at the Goth City Festival Opening weekend. The band is the has both male and female vocalist which creates a beautiful contrast with the male deep drolling vocals and the female ethereal vocals works; each song has its own distinctive sound, use a driving base, textured brittle flange guitars and occasionally an electric violin. The band have the traditional goth sound differ from other goth bands, as they have awe-inspiring upbeat rhythm, alluring me to dance.

I love seeing Alixandrea animated energy during her performances as she away appears to get into the rhythm of every song she always makes think enchantress using her voice to spellbind the audience. I love the repertoire between Alxiandrea and Ed ( Bassist and male vocalist) as it comes across as very genuine chemistry which complements each other. 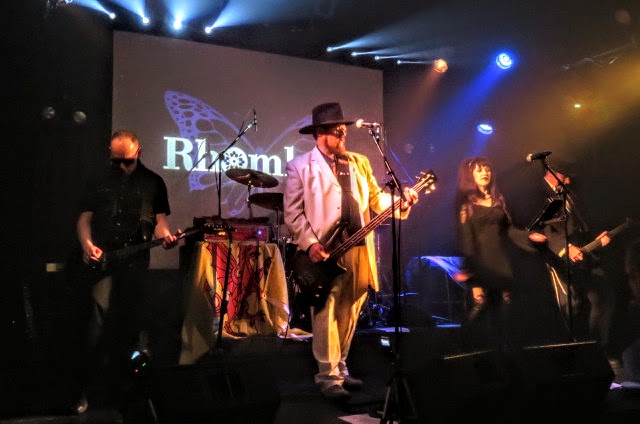 My favourite song has to be Here Be the Dragons.

After all the bands finished Carpe Noctum, started with another fantastic set. The Boyfriend and I had a good dance, as partly due to the fact we haven't been out since New Years. We left about 12:30 for a garlic bread and back to the hotel since I was despite for a cuppa.

The night was fantastic a success allowing for me to see the diverse range of bands displaying their talents and renditions of goth music. It proves that the goth and alt scene is still thriving partially in North. Also, too great to see so much support from the community supporting the band and scene from various ages range and demographics. It hard to believe to see three amazing bands and attend night was all for a fiver, I love a good bargain.
at February 21, 2018 10 comments: