Goth is Back in Newcastle

Newcastle is renowned for its diverse music scene with numerous venues and nights catering to most tastes. However, not for the Newcastle Goth scene. There are at least rock and metal nights, that occasionally play a Sister of Mercy track, but sometimes that's just not enough.  Compared to ten years ago, there so much choice of nights catering to a myriad of tastes from Goth, industrial, post-punk and EBM, ceased to exist. Back in October, Charnel House, the last local Goth night, finally closed its door after 17 years.

However, this has all changed with Noircastle the newest Goth night to Newcastle.


It all started after a chance meeting with Tim Synster. aka The Blogging Goth, who surprisingly lives in Newcastle. I met Tim at the Goth City Festival: Black Planet - Leeds Goth in Perspective. He was on a panel discussing his knowledge, experience and views on being a goth.  I had a quick chat while he mentioned he was considering of organising a potential a goth night. (I must say in person he is such a genuine, witty, and delightful person.)

In January, I ran into Synster at the Anti-Trump March in Newcastle. In passing conversation he discussed he was organising a night,  contacting DJ's and trying to find a  venue. There was no official date. Once. I saw the advertisement for Noircastle on Twitter in April, I was so ecstatic and counting the days down until the event.

Conveniently, the night was organised for the 27th May, which was the same week as World Goth day and happened to be the boyfriends birthday.


Before the night had even begun, I was regularly checking my social media account like, as I couldn't contain my excitement.  Synster had been Twittering people were already turning up before 9 pm, the lunch time.

When we arrived, Tim sat at the entrance and greeted us. He was donning his iconic Eldritch inspired style.  The entry fee was five pounds, so average for independent events, but a bargain for an amazing night. 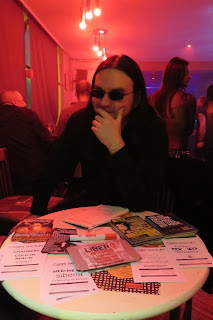 Originally, when I heard where Noircastle was being held I had my reservations about the choice of venue at the Globe. As my previous experiences have always been appalling with overpriced drinks, dodgy tasting alcohol and unfinished decor I was surprised to learn the Globe was now under new ownership of the Jazz Coop. Their hard work was evident to see and their catering to a new kind of clientele. As the decor was finished, the layout was more effective, plenty room to dance, drink prices are realistic and a superior craft ale choice. According to the boyfriend, it's very nice. They had even installed a lift. All the changes definitely enhanced Noircastle. I love seeing when owners care about their venues and patrons experiences. I definitely want to go back.

Once I heard the allure of the music weaving its potent spell it was beckoning me to dance. Before I knew it I was up dancing by myself feeling the intoxicating vibes of the music flowing from the DJ booth through to the dance floor. I could feel others felt just as ardent as I had. I got the impression people were so excited to finally have a decent post punk, eighties Goth night back.

The night seemed to have an amazing turnout with over thirty patrons attending. There appeared to be a good mix of people of elder goths and few youngsters including me. With Newcastle being so small there is a small Goth community. I saw a few familiar faces. We were discussing what fantastic night Synister had organised and were hoping Noircastle would become a regular event. 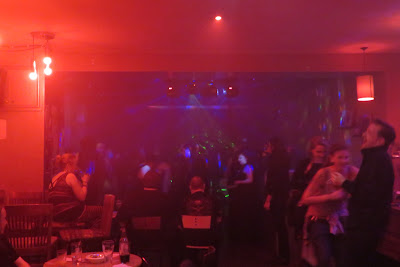 Synister enlisted the assistance of DJ'S Twin Terror and Kitty Klaws whose demonstrated their wealth of experience and passion with their phenomenal set. With each track meticulously chosen reflecting the mood of the dance floor. Simulataimiously, the DJ's were able to the influence the atmospheric tempo which enticed us, creatures of the night, to gyrate on the dance floor. 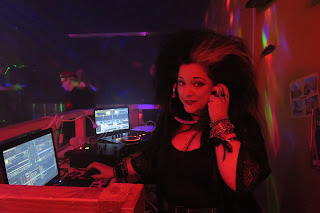 The DJ's mainly played consisted of post punk, goth, a lot of 80's and some industrial genres. With the bands from Joy Division, Mission, Cult, Cure, Siouxsie, Nine Inch Nails, and Depeche Mode. Also topped off by topped off with The Mission, Killing Joke, Sisters of Mercy.  DJ Twin Terror complied the  Noircastle set for people who couldn't make it to the launch night.

Since it was his birthday, I had to request his favourite Siouxsie and the Banshee track, Happy House, which got the dance floor filled. I know the boyfriend really enjoyed himself. 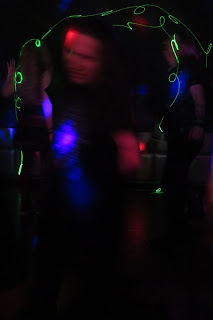 The one thing,  I have to highlight was the friendly and welcoming vibes the night emulated with random strangers happy to chat with each other, what I originally remember of the alt' and goth scene. The night was felt very relaxed with no drama, politics or pretentiousness.  I've experienced at some other Goth nights. It had the similar energy I experienced at Carpe Noctum. The night focused on people enjoying themselves and listening to great music. It's fantastic to feel part of the local Goth scene again.  I know you have online communities but sometimes I like actually experiencing in the realistic environment rather than online.

Sadly the night came to an end. The night was closed with the classic Joy Division, Love Will Tear Us Apart which the got the dance floor filled with people for one last dance.

I am happy to sees the launch night for Noircastle was a success. The Blogging Goth has planned for the second night which was posted on Facebook a couple of days later. I'm happy to see it is going to be a regular night with commencing every couple months. I think this works out much better for everybody as if it is once a month I think people are less inclined to attend. With my new work schedule, it works out better for me.

I'm ecstatic to see the addition to Newcastle ever growing alt nights . I would like to say a big thank to Tim Synster for organising an incredible night. DJ'S Twierror and Kitty Klaws for providing the awesome tunes.

For more the latest information on Noircastle click below: