A Night of Make Do and Mend

Last month, I was invited by the Cultural Vulture to attend a historical discussion, on Make Do and Mend during the First World War at Gateshead Central Library.

The night was a brought alive by the passionate and wonderful Meridith Towne.

The discussion celebrated the forgotten contributions of women in the home, and these women kept the home fires burning, morale going and even the country operating, while their menfolk fought in the trenches.  It seems only fitting since it was International Women's Day that week.

Like many, I am aware of the concept of Make Do Mend and how the British Government endorsed it during the Second World War. Also, any good Victorian Lady never wasted anything. And of course, the Social classes reused everything because of a lack of money. I was surprised to learn about how prevalent Make Do and Mend was practised in the First World War.


The lights dimmed, and Meredith entered, greeting all the audience and introducing the topic. She asked the group whether anyone was a knitter and sewer many of us nodded and raised our hands. She explained it was every women's duty to the contribute to the war effort. Ladies were expected either knit items for the army and sewers would make uniforms. 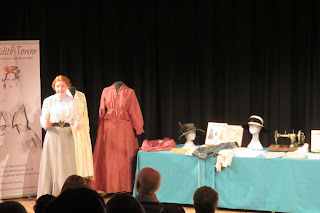 Meredith highlighted how dismissive the British Government's attitudes were of women In the case of Dr Elsie Maud Inglis, who went to the Miltary offering her services and supplies ready to establish a field hospital; She asked the military where would they like her to go, and they responded "go home and sit still". Elise was shocked, and refused to stay at home; she offered her services to the Belgium Government, who were only too happy for the assistance.

We were taught at that time women had a limited education, which focused on learning domestic skills. Often, they would produce a sample book of their work to show to potential employers. The only occupations open to women at that time was dress making, sectoral work or service.

The first part looked at the contribution knitting played in the war effort. Before this discussion, I would never have considered the importance of the humble knitted garments had on morale. Women originally began knitting items to send their to menfolk, while in the trenches, as the war continued, supplies started to run out.

The Red Cross and Army asked women to knit in the military colours. Pamphlets were published on how to knit particular items like rifle mittens, hoods and amputee covers. Women were knitting at every opportunity during meetings, churches and even on public transport with the vast amounts of knitting being produced lead to women organising sorting groups.

Many of the knitted items varied in quality which lead to odd socks and mittens needing to be paired together and removing ineffective items. This lead to knitting groups being established to teach women how to improve their knitting skills.  Often women were mocked by the media but in reality, the simple items meant the difference between life and death for the soldiers in the trenches. 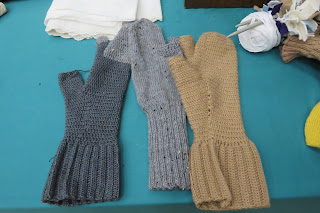 Meredith read some examples of personal letters from the soldiers, who received these care packages. Each letter had a sweet charm describing their appreciation for the packages which, offered great comfort and morale knowing ladies were thinking of them.

Next, the discussion celebrated the contributions of women and their sewing skills. I personally found this part most interesting, since I'm a sewer.


An interesting point was how the Red Cross and women were fighting for sphagnum moss, known for its absorbency properties. Like knitting, The Red Cross issued books instructing ladies to make bandages and basic night shirts for soldiers, that even the most basic sewers could complete.


Meredith explained that many seamstresses lost their jobs as dressmakers and had to resort to other means to make an income, with many women becoming prostitutes. As the war progressed the country started to become almost bankrupt and the Government started to encourage women to shop, which meant seamstresses found work, again, Many women adopted a make do and mend ethos.  During the 1914's dress hems were slim and narrow and they expanded, as a consequence of many women up-cycling their Granny's Victorian dresses. 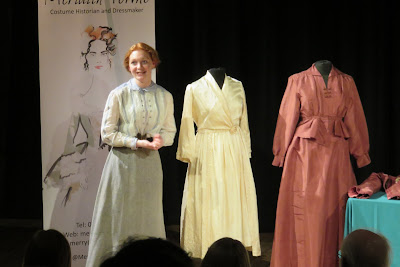 At the beginning of the war, soldiers uniforms were of higher quality as the war progressed and subscriptions were introduced the quality deteriorated. As the war progressed many of the uniforms were reused and the job was left to rag women who sorted out the uniforms since soldiers were issued them. Meredith vividly described the horrors the women encountered dealing with the uniforms; some were covered in bodily fluids, holes from bullets, metal shrapnel, some record even accounting for limbs still being attached. She emphasised at this period nobody knew what was happening, BUT, these women knew exactly what was happening. The were working long days and were paid very small amount of money for their efforts. Meredith explained offers bought their own uniforms and often were sent back to their families. One personal account describes the personal stories of one mother had the uniform burnt.

After the historical talk,  Meredith invited the audience to look closer at the items. Personally, I was mostly fascinated about the Edwardian clothing that had survived for over a century. My favourite was the old Victorian gown that was converted into a dress which still retaining the bodice jacket. 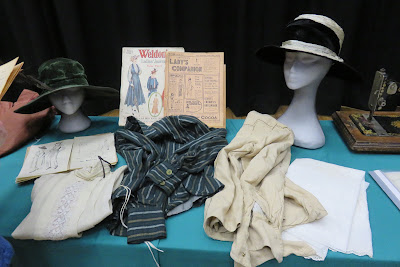 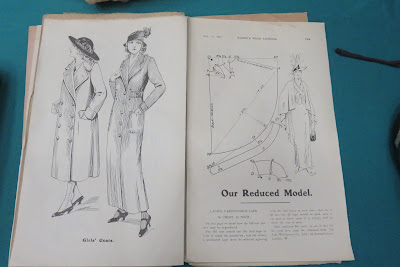 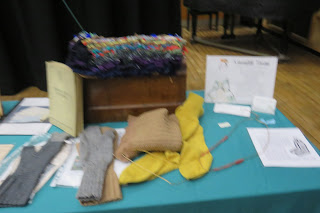 I even learnt a new skill of combining knitting and clipping matting, consists of knitting scrap fabric together to create a rug,  Meredith's  mother made the skill look incredibly easy but I found arduous. 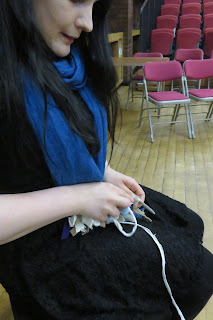 Meredith brought the night alive with horror and humour to give the audience a sense the realities at the time. The touching personal letters, antidotes of women involved, contemporary artefacts of clothing and manuals from the period enhanced the human elements often lost in academia. For me Personally, it is wonderful to see younger generation becoming enthralled in history saw these memories can be carried on for the next generations.