My Terror At The Circus of Horrors

Last Friday Night, the boyfriend surprised me with tickets to see The Circus of Horrors. I mentioned when by chance passing one of their advertisement and commenting I've always wanted to see the show.

The Circus of Horrors was held at the Victorian Tyneside Theatre and Opera House. I was surprised to learn the show has been touring for over two decades and this year,  this is the twenty-first year of touring. It all began as an act at Glastonbury festival, instantaneously was a success; leading to calibrations with Motley Crue, Iron Maiden and Alice Cooper. Every Year the show perform to a theme, and this year was The Neverending Nightmare” mind twisted of Alice and Wonderland.

On entering we greeted by a few of the performers, I must comment I was envious of their costumes.

We went to find our seats were fantastic  four rows away from the stage.We were greeted by a wandering vampire looking very solemn known as Camp Dracula; the love child of Bela Lugosi Kenneth Williams. 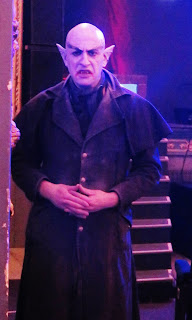 The Circus of Horrors is the wonderful alternative to the circus for those who are darkly-inclined, or just curious. It's a spellbinding, mind altering disturbing nightmarish experience; relies on shock horror tactics, tongue and cheek humour with hints of risque with plenty of corsets and fishnets

The most unexpected part was telling of native in a rock Opera style, enhancing experience. The strangest part was the ethereal beauty (such whirlwind of  the horror themed circus) the rhymatic gymnastics, the seductive hula hooping and fire dancing performances of Twister, the Enchantress and Anastrcia.

The show is definitely not for those who are easily offended or faint hearted as the prelude warns particularly to sissies or Charv's were told to " F*$£ off" (in a humourus way of course).

The stage was dark, suddenly and surprisingly a metal rift began, silencing the audience, light flooded into the auditorium. And THEN, Dr Haze the Undead Ring Master was introduced and strutted on the stage and sang in heavy rock operatic style filling the theatre with his song. Setting the tone of a fast pace frisky show keeping the audience gripping to their seats in awe and hysterics. 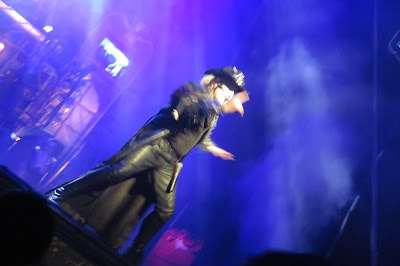 The show moved on to a poetic and twisted mind narrative of nightmares of young woman dreaming in a bizarre world of nightmares; a disturbing nun with  a hideous skull mask sitting in a mask and being crude. 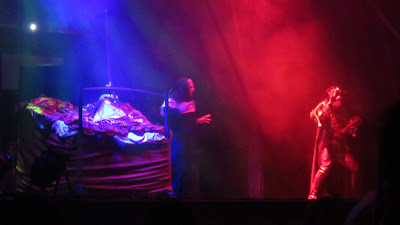 The show then morphed into the delights of  The Twister and her spectacular gravity defying contortionists acts. My favourite part was when she supported all her body weight using her mouth. 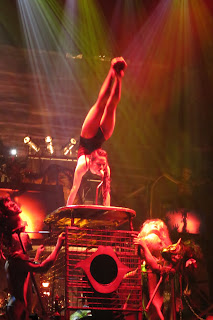 My  criticisism of the show I feel the show didn't really follow the themes or narratives it had stated. Due to the sporadic nature of the sketches, it felt more like a comedy show rather than a story. However, the narrative was mentioned in act two.  There was some continuity  that fed into each scene  but not enough to carry a full storey. This never waived my enjoyment of the show.

The next performer was Hannibal Hellmurto The World's Greatest Sword Swaller. He resembles a long-lost member of  Rammstein. He started with various sized swords worked his way to swallowing a chair leg. 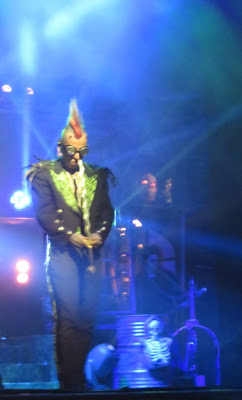 After a comical laundry sketch between Camp Dracula and the Maria Morse. Camp Dracula was shoved into the oversized washer. into mini Camp Dracula aka Captain Dan the Demon Dwarf. I've got admit what this guy lacks in size he makes up in grit, spunk and insanity performing his bawdy antics of eating a glass bulb, drinking beer through his eye and his own personal use of a Henry Hoover. 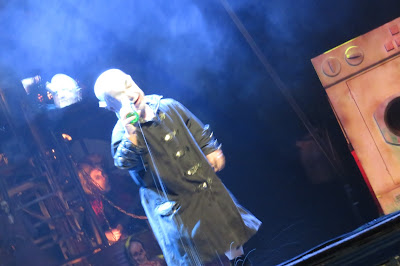 The Captain was thrown into the washer as punishment for forgetting his pants.Out came four  Dia de  Muertos style luminous skeletons, who moved fluidly enhancing their sinister appearance. 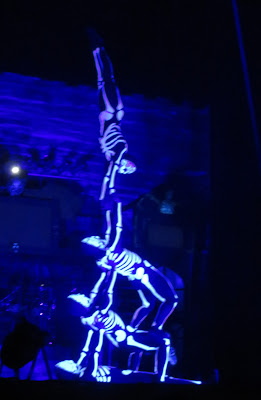 Next were a roller skating duo gyrating around a small circular stage exciting. Every move was flawlessly choreographed and executed. 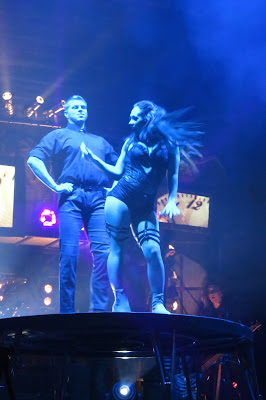 There was an intermission of 666 years.


Personally, I found act one in certain places slightry  mundane and predictable with some of the gags. Also, I definitely enjoyed e such as the twisted dream state sequence with The Twister suspend in mid-air, the roller skating performance, and  Camp Dracula antics. In comparison to act one, act two was far more excitingly entertaining. I found myself imore terrified and in a fit of hysterics. As the boyfriend suggested a great show always build up to an awesome climax. 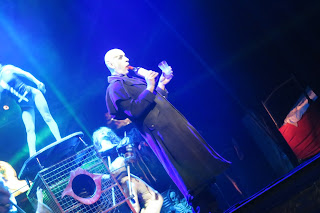 The second half began with the narrative that got lost in act one and refound itself in act two. It began at the beautiful young protagonist waking up and watched from aside, all the visual delights and curiosities of the Victorian Carnival Freakshow. 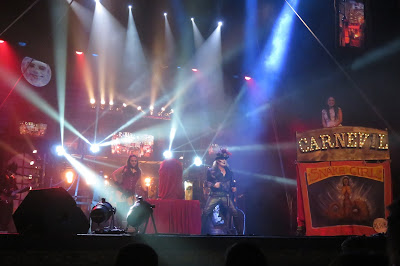 The second part was spectacular and harrowing acts, and introducing new performers including:

The Voodoo Warriors from darkest deepest Africa. Performing with fire limbo, skipping, and awesome back flips. The guys were , so energetic and fun I think this one of my favourite performers. 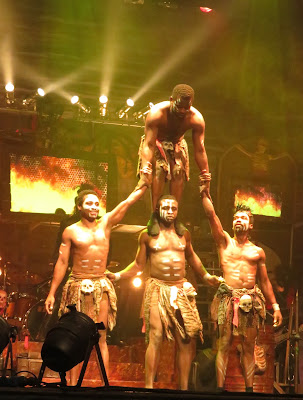 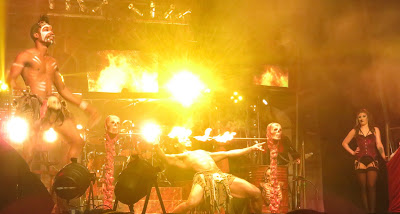 Anastasia IV the descendant of Polish Notability who talents included fire eating and Hair hanging, Astrantia was suspended in mid-air by her hair  My favourite acts was when she was held upside down with an ariel loop attached to her head, and spinning in mid air with sparklers attached. 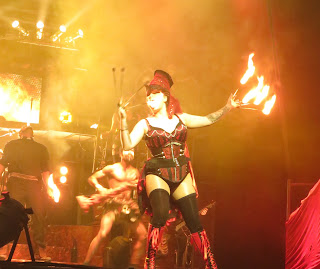 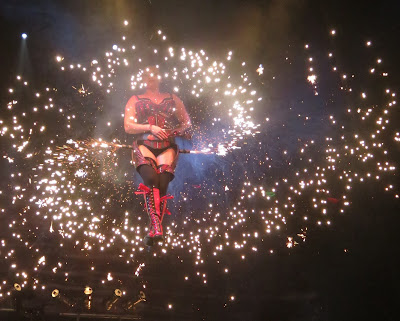 The most awesome and disturbing character has to be  Relik with his hoard of  Psycho clowns.  He interrupted the current performance, and directed the audience, Dr Haze and Maria Morse sang "I hate that clown". Screams could be heard from the back of the theatre the grotesque looking clown creeping through the audience and Relik. 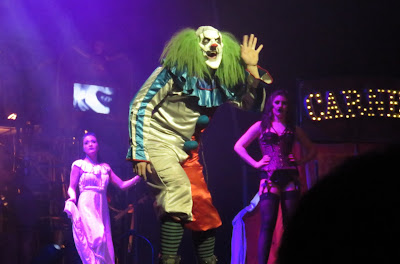 Hannibal made a even more, grossly intriguing performance with demonstrating  why he's is The World's Greatest Sword Swallowers. By swallowing a corrugated saw, and an electric neon light containing mercury.  Hannibal demonstrated his dedication to his art with altered floating ribs allowing him to place a 90 degree curved sword into his oesophagus.

The show seemed to have everything including wedding, sadly the groom intended never showed so the brave but unexpected audience member as an unwilling victim as the groom. Unsurprisingly, it lead to a fantastic rendition of White wedding. The audience's member had a bag placed over his head found his bride was the nightmarish Rellik unmasking him. 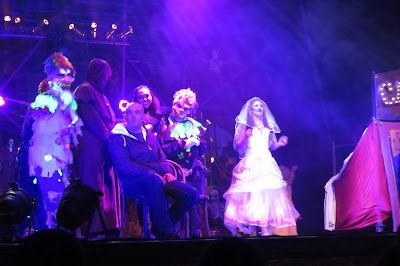 By the end, the show took a much darker turn with Dr Haze sacrificing The Enchantress by slitting her throat and sewing Maria Morose in half. Don't worry Dr Haze got his coming up with Rellik and his Pschyo clowns sawing him in half. 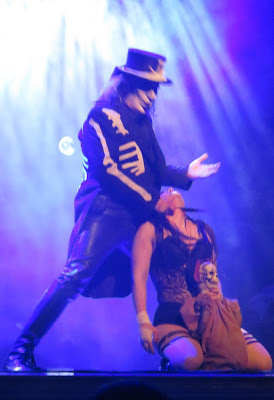 Even at, The Circus of Horror has a happy ending. Everybody magically came back to life. Dr Haze showed up appeared in the back of the Theatre singing. Maria was somehow was bandaged back together. 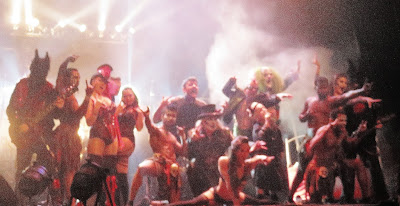 Overall,  it was such a fun night, and I can't recommend this show enough. Its definitely worth seeing the show for the pure novelty value. The show used the right balance of  comedy, terror, crudeness and bit saucy without too being overtly offensive.  Due some the content is definitely not suitable for the little ones. My partner loved the show even more than me. He had  a huge beaming smile through out the show and kept moving along to every song. This is definitely the start of new annual tradition. 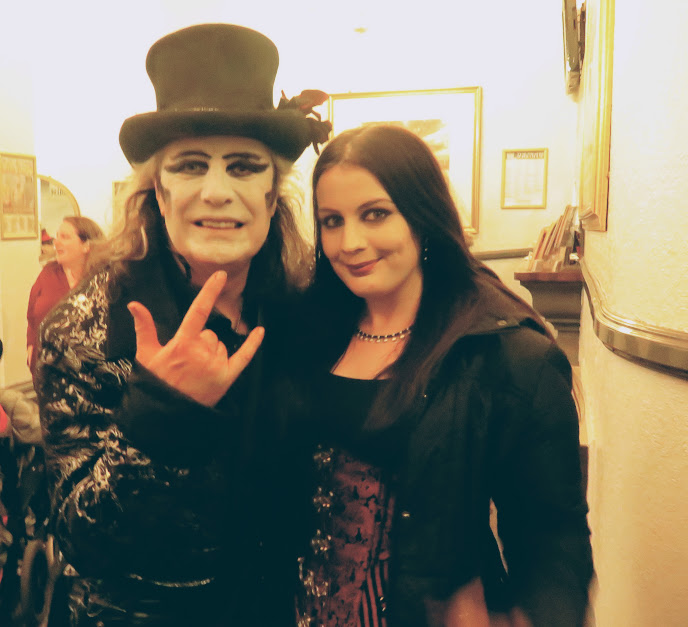 I even got to meet a few of the cast members from the Circus of Horrors. I  had a photo with taken with Dr Haze. All the entertainers were, so friendly and talented.
at February 01, 2017