All the preparation is over now. Christmas has been and gone. So, we all can chill out and breathe a sigh of relief. With hindsight everything always seems copious amounts of work for one day, from trolling the shops, stressing about presents and doing the prep work for a sumptuous dinner.

Like in recent times, my Christmas was very quiet a affairs and done on a budget, For example. I've spent about £5 per a person  for present and spent £2 on my nephews, albeit the boyfriends. Either way all the presents seemed to go down well. . Particularly, my nephews who got excited about their chocolate and Star Wars mugs.That was a nice suprise despite the budget everything went down well.

I got up at 11 and got ready it took me a silly amount time to get ready to the point of insane. I decided to get dressed up a donning bit of glitter and taffeta. Recently things have been really quiet so I've had no reason to both dressing up, so I've been slobbering out. I think Christmas day warrant some dressing up.

This was my make-up 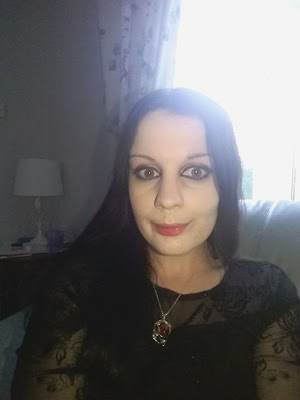 This is a close up of my clothing. 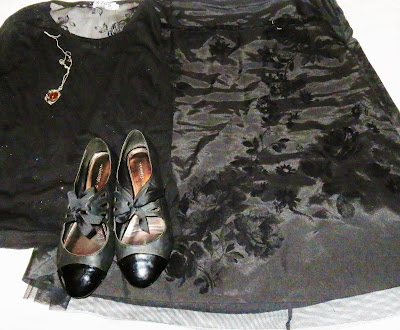 I went to my mams for part of Christmas, while the boyfriend opted to at stay home. On arrival, we did our greeting and exchanged Christmas gifts. My mam had prepared a lamb dinner, as I'm a picky eater, so I had an odd combination of a lamb sandwich with mash potato and a slice of Mediterranean vegetable pizza . For desert a bit more of  a convential ice cream, with fruit. I was trying to avoid over stuffing myself as I still had my Christmas meal with The Boyfriend

. We watched some festive television and head up to my brother's for a couple of hours. Again, we caught up and ending up watching a some Christmas re-runs of  Only Fools and Horse, their most famous episode is where they dress up as Batman and Robin. This stimulates a lot of memories for us as we often watch at Christmas. It's a hilarious classic British comedy. Again, we had a family catch up with everything and all our developments, My Brother and his wife puts on some party food, which was a nightmare for me to resist, however, I was good and kept my appetite for dinner.

When I got home the boyfriend had prepared our duck and veg. This year,  I attempted to make Yorkshire puddings from scratch, which turned out to be reasonable; they ended up more like dense pancakes'; they're editable I think the issues was I used self-raising flour rather plain flour. Anyway, the duck was deliciously scrumptious, I think we'll be having from now rather than Turkey. 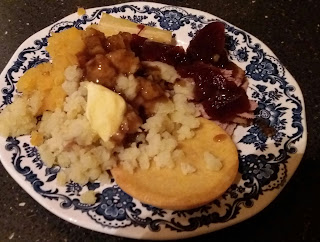 The boyfriend and I had exchanged gift as 11 pm unusually late for us. The Boyfriend got everything I wanted. The first thing is my netbook, Netty has been dysfunctional for the last few month as the keyboard been unresponsive and the battery just seemed to loose power very quickly. So for Christmas, I got a new netbook keyboard and battery, which makes it almost like new, so it's going to make blogging easier as well. I also got a bendable tripod for my camera and a big box of truffles. 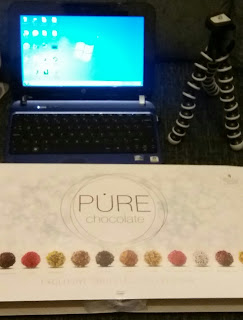 On Boxing day, I found an extra present of a tin of mackerel, which was a jibe at my love of stenchy fish and glasses string hidden in a stocking. 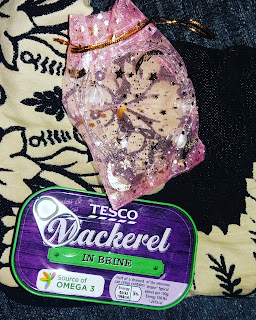 My families presents.  Mam bought me a top from Primark, I Iove the top as I've been looking for something with a criss cross top with bell sleeves that's made of natruel fabrics.  Also, a smokey eyeshadow palette,  My younger sister give me money, yay. 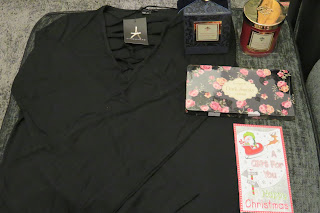 My Brother surprised me with a fragent candle of midnight poppy and saffron that's smells goregous. I'm not sure where to put this. 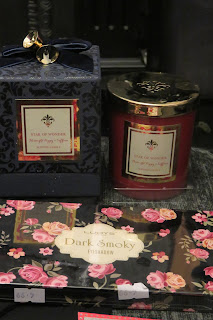