Last Tuesday, I discovered both a new event and concept of Rockin 'n' Bowlin' which is ten pin bowling to rock music. A concept I've never thought I would see in Newcastle.

1.It's a small city and the event I would associate with larger cities.

2.The general demise of the alternative scene the last few years. However,  the rock scene on the way up  Trillians reopening and Grind House now in its second year, woo congratulations.

What's even better is the event held at  MAF Bowling Alley located at the top of Westgate Road. which means less than a few minutes walk from where I live, so even better so no need  for waiting for buses. I love living in Arthur's Hill.

The event takes place on the first Tuesday of  every month starting at 7pm and finishes at 11pm, so not too bad even for a work night. The Rock and Bowl night only started in July, so it's slowly gaining popularity. The event plays a variety of range of classic rock and heavy metal.

The boyfriend suggested the event after seeing it advertised, he's got a nose like a bloodhound for any kind of rock events occurring. I've been begging him to take me bowling, after telling me he often goes with work his colleagues. He tried to dissuade me, and it hasn't worked. So, I guess it's a good compromise I get to go bowling and he listens to rock music.

There were two options for playing we could pay £2 per a person per a game or pay £10 for a lane per a person for unlimited games til closing. We weren't sure how many games we wanted to play and opted for the first option. We arrived the place had few people already playing more people arrived during the night but it didn't get too busy, which was good.


I had my reservations until I could hear Iron Maiden blasting definitely putting me in the mood to do some bowling. I originally thought the rock music  would have been more of a combination of  Indie music and mundane modern rock music. Nope, it was classic rock and heavy metal everything from Black Sabbath, Journey, Meatloaf ACDC, Disturbed and other great music. I felt like  more of a Saturday night at rock club rather than a bowling alley. In between games the music had me lightly heading band, doing air guitar and wriggling my bottom. The DJ seemed more than happy to take requests from patrons so it explained the eclectic range being played. My only criticism was bloody Du Hast was played by Rammstein played please play any other Rammstein songs anything but Du Hast. Apart from that, I felt beaming from having such an amazing time.


After playing the first game we could hear our stomach's  growling and decided to get food. The venue had a cafe and a pub. I was really surprised to find the pub. As our area has an ancient law which forbids any pubs being built with the area of Arthur's Hill, I don't exactly know the reason but I think in part of the building work was associated with people who were involved with the Temperance movement. The temperance belief abstained from alcohol consumption and  wanted this principle to be instigated in the area.  The bar stocked a good choice of generic beers, cider, lagers and soft drinks at cheap prices. The boyfriend was happy with the quality of the Guinness.

We ordered burgers and a portion of chips for £8. The burgers and chips were reasonably priced, especially for a bowling alley.   The food was decent for the price and defiantly filled the tummy. The portions were a good size, everything was cooked to order  and also wide choice of condiments. The cook was really friendly and more than helpful, he even offered to bring the food to bowling lane; but we opted for the quiet of the cafe. The cook even had a quick chat with us and asked how we like the food. The menu, on the whole, had an extensive selection of food from panni's, hotdogs, burgers and even a healthy option of jacket potatoes, again good prices.

After food,  we went back to play a couple of more games. One of the issues I kept encountering was the scoring computer, seemed unresponsive and took multiple attempts before they responded. Also, there wasn't much info provided on how to use the computers, which was irritating.

Another issue, I will admit was the venue felt a little run down and really could benefit from a bit of spruce up. Apart from that, the place was clean and reasonably tidy. Still,  for the price, we paid it was a bargain if you want somewhere a bit more glamorous  you could try  Lane 7 but you'll be paying a lot more than we did.  Then again,  the place made feel nostalgic and reminded of my bowling experience as a teenager. 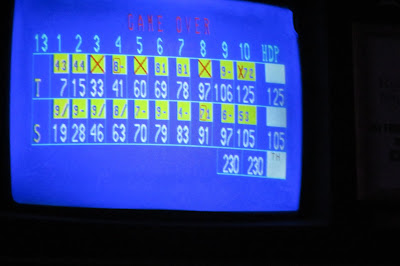 During the night the boyfriend was on amazing form he's constantly told me how awful he was at the game. Yeah, right, he got loads of strikes and won every game. On each turn,  he seemed throw the ball so fast it felt like it was over in a second. No wonder why he won. Then again, I've alway been a crap at bowling. 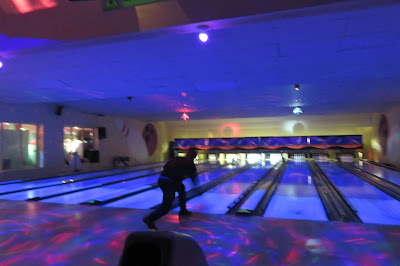 I did manage to get my first ever strike, so I was so elated I jumped up and down clapping. I got caught in the excitement of great music and a lively atmosphere.

I also wanted a couple of photos to remember the night but most of them crap . I attempted to put on a glamorous pose with the bowling ball, I've got my eyes closed, great pose. 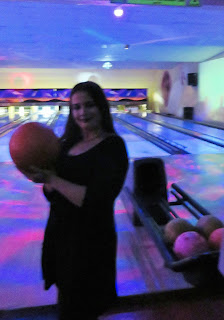 During the game, I became way too excited and wound up by the boyfriend winning. While trying to focus so hard, I dropped the bowling which rolled across the lane so I had to quickly chase it. I got a few laugh from the spectators, fortunately, no one was harmed, which was my concern. So I  destroyed my illusion of gothic mystic, yeah right, that never existed when I'm  a total klutz. I did feel embarrassed but the boyfriend and I joked about it.We played until 10 and returned home.

For me, it was great doing something different rather than sitting at home vegetating in front of the T.V.  Also to find something that's a rock based activity that doesn't include being in rock bar . You can actually do bowling  rock music is great also since the venue offers an option of food and alcohol is added bonus. Ok, the place does feel a little bit shabby but then again your paying student prices, so there always going to be something. Hey, I prefer more student places than more trendy or glamorous places. I think the student places have more character and usually fewer people. Either way, I had a great night, I doubt we'll be doing it every month but I would like to attend on regular basis.