Often I avoid fashion, and I develop a mental block avoiding disposal fashion at all costs. Usually, I succumb to the trends once items get donated to the local charity shop .

This is not the exception I've noticed charity shops are getting more donations of chunky boots and platforms. ( the consequence of disposal fashion.) When I first encountered it; I hated it I felt transported into the movie Clueless, with so many people wearing small backpacks and platforms. 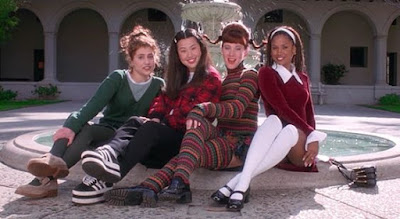 
Now, I'm  starting to like this style, especially the biker  boots style. Simultaneously, I've spent many an insomnia night searching google images for gothic inspiration to try something new. I've mainly taken ideas  from the nu-goth look and  how they've incorporated the trend into their outfits; the picture looks fab, and it's persuaded me to purchase a pair

I'm debating whether  nu-goth is more of an evolution of goth fashion rather than subgenre in it'own right but it's not to say it isn't. It's my current impression of it, certainly, more reading is required.   One thing that can be determined the ascetic is striking and seems to suit a  younger generation of goth. Nu- goth appears to by a myriad of influences from mainstream fashion, hints of Lady Gaga, 90's fashion. occult imagery and oh yeah, classic black. 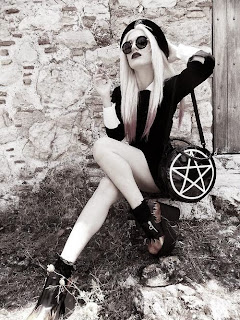 While searching for the through the google images it depicts the look being more complementary to willowy and slim body shapes rather than us curvy gals with large bottoms ,again this is what I've typically found. I don't think I'm a nu-goth convert, however, there are certain elements I like and I can incorporate into my personal styles such as the clumpy style boots, PVC skater skirts and dramatic two tonal lips.

Below is my interruption of Nu- Goth 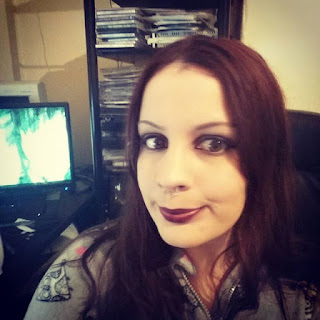 
Getting back to my chunky boot:I haven't had much luck in the charity shop or main high street. I found  some gorgeous chunky boots on eBay.  I fell instantly in love with the style of boots, everything from the buckle straps, to the chunky heels and the shiny PVC material just made for an interesting pair of shoes.

The boot in total  cost £14 the boots were £10 and £4 for delivery. The boots were advertised as having a mark on them it was unnoticeable, let's face it after a few weeks  of wear they'll get scuffed anyway.

My first thoughts about the boots were going to hurt my feet, surprisingly,  they are comfy  and feel lighter to walking than first anticipated. Mentally they l feel taller than actual heel size e.g I feel 6 inches taller, where the heel is only 3inches in height.Then again when your my height and wearing any kind of heels me makes 6ft. Despite the bargain price, the boots  look expensive and upper of the boots is rigid material but didn't affect my gait. The soles and heels look like rubber and when walking the sole feels sturdy but also as it absorbs the shock  when my foot comes into contact with the ground.

The only downside is the shoes have to buckle up so you can't put them on in a hurry.  The Boyfriend highlighted and jested about the clinging noise of my boots when walking. Overall, I'm ecstatic about my new boots and add an extra something to an outfit.