The boyfriend suggested about going to a gig, sadly the gig was sold out. That's the reason I chose to I  my underbust. Imay of  subconsciously been inspired by Sylvie, Little Corp Goth Girl wearing her corset.  Surprisingly, I found the corset comfortable to wear, I think, I wore it for seven hours and managed to walk four miles, not bad for someone whose doesn't often wear corsets.

I walked to Gateshead from Newcastle or my counsellor appointment. Sadly, my counsellor has discharged  as she feels I'm no longer need it. It's a shame I really liked my counsellor as we had quite a lot in common; she was always very emphatic and professional. I guess that's the whole point. She has suggested about attending a few courses on how to deal with my issues for the future .

The boyfriend messaged me about the gig, and we agreed to meet at Trillians for drinks. We ordered one of their delicious homemade meaty burgers, which wasn't the best idea since with wearing my corset,  I found it difficult to eat and had to stand up to make myself feel more comfort. On the plus side, I got so many compliments about my underbust and how unusual it, particularly  the metal clasp.  The boyfriend found a hidden pocket, great if you don't wanna take a bag.  Throughout the day, I felt like a pirate with the buckles and the strippy fabric;  all I was missing was cutlass and triangle hat.

We stayed for an hour to listen to the live band, Saint Dom and the sinner,  a rockabilly band. I  have a bit soft spot for Southern American folk including, swampy blues, bluegrass and country, I'll probably shouldn't admit that, oh well.

My outfit the underbust is the one  I got from Brighton,  worth the money. Underbust from Steampunk Bizarre.  mesh top, Hobbs, charity shop find, a skirt made by me. Boots Doc Martain.    I'm wearing my pendant from local designer Laser Panda Designs. 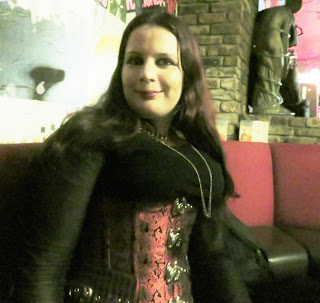 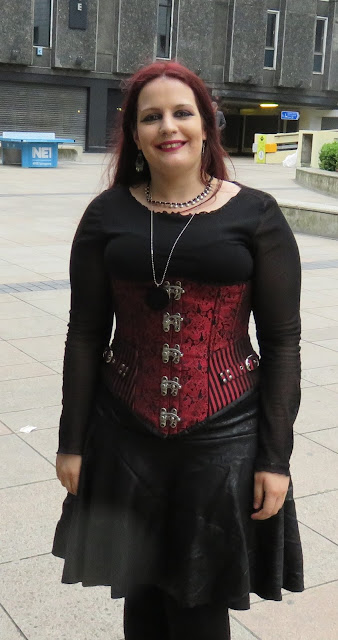 Special thanks to the photographer aka the plagued boyfriend.

Email ThisBlogThis!Share to TwitterShare to FacebookShare to Pinterest
Labels: Nights Out, Outfits