For the last few months, I've been searching for a crochet and knitting groups, to no avail, I found none that fitted with work.  I felt the urge to uptake knitting again. After seeing a summer hat crochet pattern, I fancied learning to crochet.  I saw a notice advertising a knitting group.

Last week was my first time attending the group. I was showed the different crochet techniques. I picked up the skills quite quickly, however I need more practice, I started off  practising chains and ambitiously, I attempted to make a small coaster, which turned into a wizard hat for my dragon. 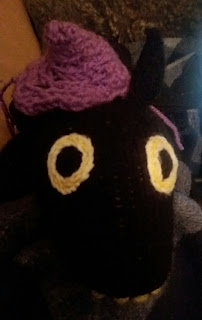 The group is held within the art shop, the Chilli Bizarre. The shop is linked to the Chilli Studios, it's a nonprofit organisation that supports people with mental health issues by enhancing their lives through arts and crafts. The products are sold in the shop and profits are split between the organisation  and the artists. The group costs nothing to attend but the people contribute money for the beverages, which goes back into the organisation.

Everyone in the group was very cordial, welcoming and supportive. They all appear to be very creative and craft orientated. One of the volunteers attend along with her daughter, who is only eight, but can already crochet, often makes dolls and flowers. One the other volunteers was a professional seamstress designing and making wedding dresses. I found I had  a lot in common with the group  and main chatted about personal creative pursuits.


The second week, I took my knitting, as I'm attempting to make a flask holder when I go to Brighton. I've attempted to knit and completed a few lines and had enough so, I opted to crochet and re-attempted to make a coaster.  I had a lot of help crocheting.

I went to my Mam's; we had a cup of tea and caught up about her holiday to Malta, I didn't stay long because she was on night shift.

I met the boyfriend at his mate's house, and  they all described the nightmarish experience of completing the  project. Afterwards, we all  went out  to the local pub, and for a well-earnt pint for the lads arduous work. After getting the first round of drinks the guys gathered  around the pool table to play against each other. I sat on table by myself scoffing some cake and kept occupied with my knitting, I ended up with some odd and quizzical looks

The boyfriend offered me to play a few games of pool, and I agreed. I enjoy playing pool but  playing with the boyfriend it's a novice going against a professional. Surprisingly, I won both games by default, I think the boyfriend let me win.

Oh yeah, I've dyed my hair burgundy red as I fancied some colour and felt too lazy to bleach my hair.
Top - Next - Charity shop
Skirt- Made by me
PVC Boots-  Primark
Bag - Charity shop
Jewellery - Maltese silver 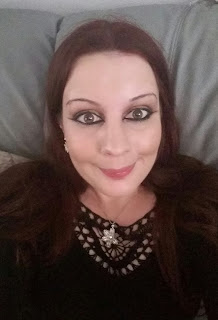 A close-up of necklace and earrings 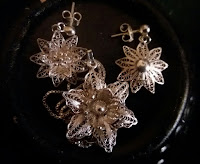