I attended a meeting in Sunderland, a small city located city approximately ten miles from Newcastle upon Tyne. Sunderland is a lovely city to frequent, especially if I want a change of scenery or a charity shop expedition. There are various places of interest, and it's very similar to Newcastle but often overlooked by Newcastle acclaim in comparison.  Sunderland was an industrious city,  producing coal and shipbuilding; the city once hailed as, " The biggest shipbuilding city in the world".

During the last few months, I’ve wanted to develop my writing skills into other disciplines. Recently, I volunteered as a contributory writer for a local property website, and two articles were published on their website, yet, to no avail I’ve had no communication. One night, I was searching the internet for voluntary opportunities, I came across a charity advertisement for a writer and emailed my interest. I received a response from the charities North of England Volunteer organiser and arranged to meet at one the charities Tyne and Wear meetings.

I arrived in Sunderland an hour before the meeting; I explored the charity shops and found nothing that appealed. I ventured to the Winter Gardens a small museum with a variety of small exhibitions relating to the history, the culture of Sunderland and North East of England. The most unusual part is the indoor tropical gardens that has a staircase and balcony overlooking the canopy. The garden replicates the ecosystem and producing an oppressing heat and humidity ideal to cultivate plants, but not for walking around. My favourite part was the small waterfall and pond with koi fish swimming in it, I find it relaxing watching the fish gyrate. 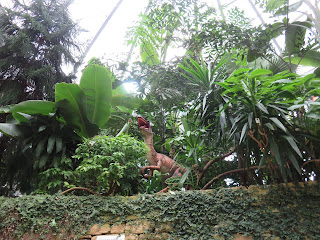 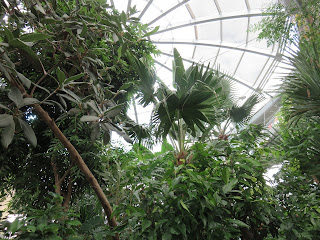 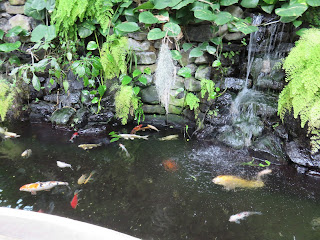 I explored a small exhibition about various textile crafts from the North East of England. Part of the exhibition explores women’s role in creating the textiles, how women were taught these skills in preparation for married life skills like embroidery, quilting, and knitting. That many of these textiles were handed down to families and used for dowries.

That embroidery was an essential skill for women and used it to decorate or place spiritual symbolism into the linen. Quilting was originally used to insulate against temperatures and used for armour, eventually used to decorate for fashion. Women from rural communities were encouraged to make quilting as a way to supplement their income. 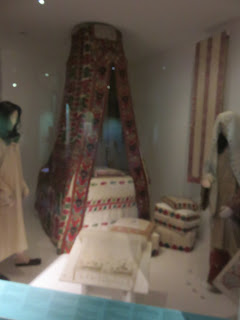 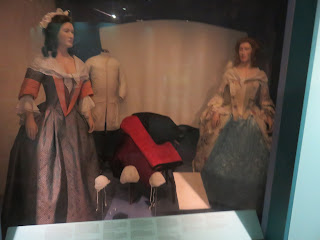 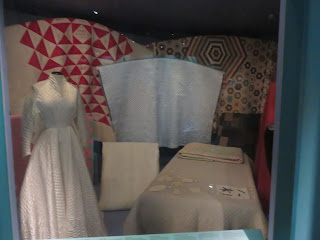 Women used their knitting  skills to create Guernsey knitted jumpers for their menfolk when they went fishing that were ideal as they were durable and warm. Northeast there was a lot of recycling of old clothing made into hooky or clippy/ proggy mats, especially during the Second World War limited resources people recycled old linen.  In the 19th and early 20th women created rugs to cover cold bare floors, as carpets were extremely expensive. In the mid-20th century mat making lost its appeal and women preferred canvas rug making kits, women in small mining communities kept the practice up, has regained resurge in popularity and utilising modern fabrics. Looking around gave some inspirational ideas to complete my scrap fabric. 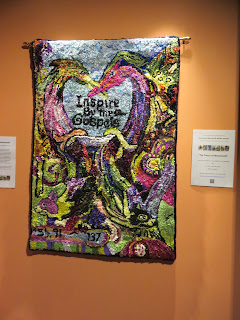 I was sitting writing notes in my blogger journal. I end up meeting a rather unique and colourful lady who turned up for her monthly creative group. We discussed arts and craft (glee one of my fav topics) and, about the resurgence of traditional arts. She showed some of the beautiful creations she made using proggy and one creation she used various fabric techniques to create a front a cushion cover, and I showed her photos of my proggy rug, complimented it. 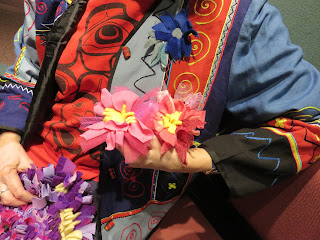 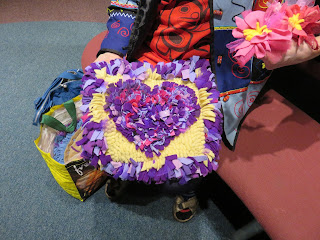 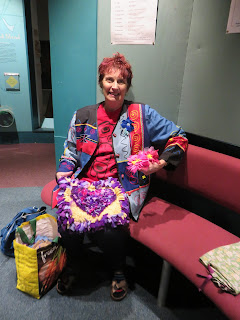 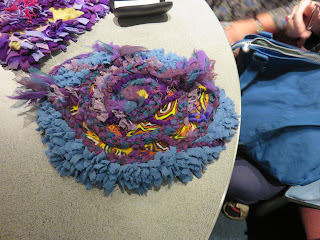 The meeting
Despite having navigation knowledge of Sunderland, I was still late for the meeting and ended up in the wrong building confusing the Winter Gardens for Sunderland library, two doors down, I know for next time. I met the charities Northern regional volunteers’ coordinator, who oversaw most of the North of England’s branches expanding from the lower a parts of Scotland to certain areas of Yorkshire. I first made my inductions to the coordinator we were both mutual enthusiastic to meet each other’s and introduced me to some of the Sunderland members. On first impressions, I was extremely nervous, and everybody made me feel relaxed and welcomed. Everybody was very cordial and interested to meet me, we all chatted about ourselves.

The coordinator and I had a lengthy discussion about the charity, it beliefs, how it supports it’s members and non-members, and nationality and regionally events.  Also,  the role I would be volunteering for, how it would relate to the Tyne and Wear, branches, ideas for articles to write about and examples old newsletters that were produced to stimulate new ideas. Consideration of expanding my role to organise social media for the charity.  It was extremely interesting and quite a lot of information to take in. I even got invited to the Tyne and Wears members Birthday party and asked to produce an article about it. I said my goodbyes and went my way.


Food
Ater the meeting, I passed a small traditional café and heard my belly rumbling indicating it wanted food. I entered, shown table by the waitress, sat down and ordered scampi with chips.  The table opposite me was an elderly gentleman sitting, talking to the server, and I joined in the conversation. I often talk to anybody and everybody I meet, my dad regularly does this. I asked if I could join the gentlemen, he agreed and said ‘yes, take a seat’. We chattered; he mentioned that he came to the café

Eventually, my food was served with wedges made from good potatoes and a generous portion of salad including lettuce, carrot, onions and sweet corn. I enjoyed the food and indeed I’ll go back again. I was about to leave until my weakness for carrot cake alluded to ordered a slice. The waitress mentioned their deal to have coffee with any sundry items. I searched through my bag; I realised I didn’t have enough money and told her. Before I knew it, the waitress placed a cup of coffee on my table and said it was fine. The café has extremely relaxed and friendly; creating a nostalgic atmosphere, reminding me of places I used to visit with my Gran and mam. 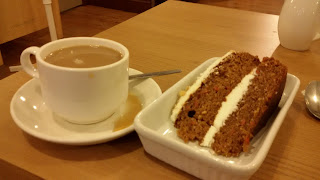 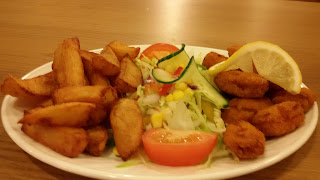 In exchange for a free cup of coffee with my cake, I agreed to mention the café on FB and my blog. If you visit Sunderland I highly recommend going to Havershams resturant, friendly staff and amazing food. If they don't have what you want just ask: 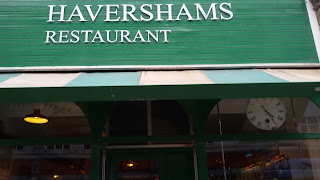 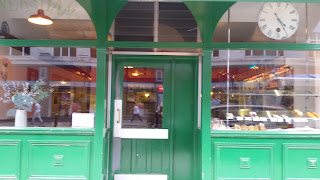