Primark is a budget retail stores found all across the Britsh Isles and recently expanded into Europe; I am not sure if its spread into America. The first store opened in 1969, in Ireland, Dublin on Mary Street and was called Penny's. The firm specializes in fashion are for all genders and ages; also sells accessories and homeware. The fashion media have hailed Primark for its catwalk replica's and gathered a plethora of celebrity fans donning its clothing. Primark has captured the fashion world's attention, often nicked name as Primarmi. The brands have found its place in London fashionable Oxford-street department stores.

However, Primark has faced criticism and controversy over its ethical working practices, through using third world labor. The company has always tried to act quickly by ensuring and implementing fairer practices for the workers and ceased business dealings with unreputable companies. In 2013, in Bangladesh where a clothing factory clasped because of the company owners corrupt practices and failed to carry out essential maintenance work on the building resulting in 1,127 people dying and over 2,438 were injured. Primark offered $200 compensation, emergency relief and agreed to carry out safety checks building premises it does business to do in the future.

I remember when I first became a Goth,  I was 13 years old;  I started shopping there, as it sold an array of velvet tops, long gypsy skirts and black boots at bargain prices. I used to save up all my dinner money, and on Saturday's during my teeny greeny years I would go shopping there to buy by goodies. My mam is an avid lover of Primark, especially when we went shopping (she sorted eventually accepted my love of black ) and would usually suggest another colour  I'd shake my head, said I wanted black.  At one point, she purchased me a gorgeous military velvet jacket for £6 and some beautiful long skirts I Still got lurking in my wardrobe. Mam and I would leave with bags of stuff for £20. I got some fantastic stuff that fuelled my goth years with fabulous clothing.
I 've even seen on other Gothic bloggers posting about amazing accessories they've bought from there.

Over the years, I've noticed that Primark's  quality certainly was deteriorated from what I can remember,  even back the it wasn't great. I over the years there hasn't been that much amazing stuff I do not know, it maybe a combination of fashion trends or I am just getting pickier about what I buy.

I still go into Primark occasionally; I do find some great hidden gems. I also have a cardigan fetish and purchased most of my cardigans along with pj's vest tops that are high quality, I usually end up wearing during the summer with long skirts.

Recently, I've brought quite a good few things there which have more appealed to my Gothic tastes.

These have been some of my recent finds 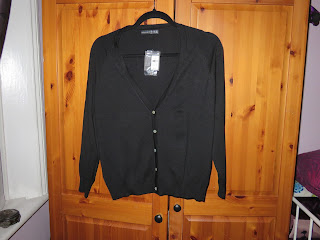 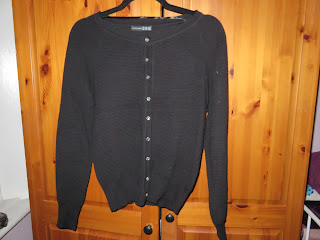 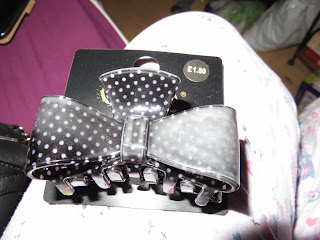 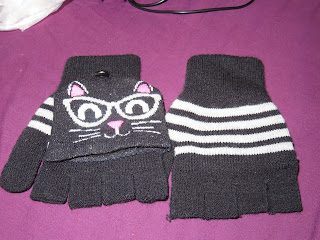 Cute cat gloves 50p and were on sale, so will do for next winter. 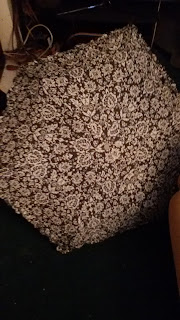 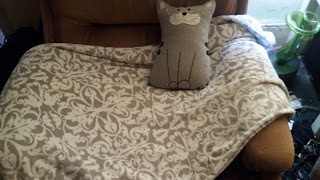 I love to cuddle up with the blanket as it's incredibly soft, and the pattern makes me think of medieval tiles. Dexi, the cat, makes an excellent cushion. 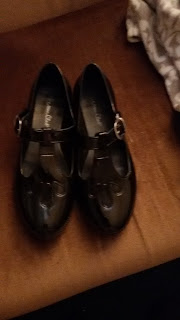 I bought on Thursday for £3, a pair of jelly shoes, and received a load of compliments; they're perfect summer shoes.

Email ThisBlogThis!Share to TwitterShare to FacebookShare to Pinterest
Labels: Shopping